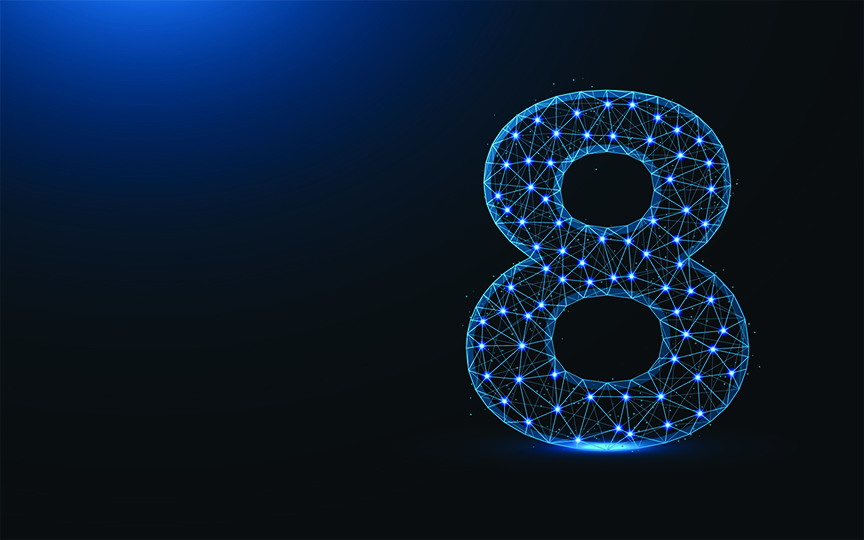 Most people have heard of certain famous or popular numbers. These include the lucky number 7 and the evil associated 6 repeated three times. But what about 8? This number is not as commonly referenced as the other two but is nevertheless a very potent and powerful number. It is a number commonly referred to as an angel number.

God entrusts His angels to guide and guard us in all ways (Psalm 91:11). Doing that requires them to speak to us as God’s own messengers (Luke 1:19). One unique method that guardian angels use to speak to us is through angel numbers or numbers that are repeated in a sequence.

The number 8 is a very special number in the bible, as it is used 73 times. It is often used to signify new beginnings: after the seventh day of rest, a new week started, and when Jesus rose from the grave, it was the eighth day of the week.

Another interesting sign supporting its biblical significance is the fact that new order is mentioned in 8 separate verses in the first chapter of Genesis (verses 3, 6, 9, 11, 14, 20, 24, and 26). Angel number 8 also plays a part in manifesting abundance, which may come in conjunction with a new beginning.

Seeing the number 8 is a positive affirmation that the angels support you, while also asking us to listen to what they may be saying, as they cannot be a part of our lives without our permission.

Perhaps one of the most associated concepts with the number 8 is balance, and with it, karma. This balance or Karma can be either a good or a bad thing for yourself; if you are treating others right, good things are bound to come your way. If not, the phrase what goes around comes around comes to mind.

If you are seeing this number, ask yourself how you have been treating those around you. Have you been treating others as you would like to be treated? The golden rule exists in virtually every religion, and this is no coincidence. This idea of balance and karma is part of what makes the number 8 a highly spiritual number – that and the fact that it is a transitional number sitting in between perhaps the 2 most spiritual numbers of all: 7 and 9. This is part of what can cause it to be conflicting when it is paired with Angel number 4.